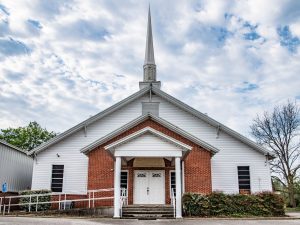 Before Hainesville Baptist Church was founded in 1897, Thomas Blackwell taught its first Sunday School class in a school building located on the Billings’ family property. The church later organized under Rev. George W. Whitehurst in a building erected on land donated by the Haines family. Due to a fire, records up until 1906 were burned, leaving little history of the church before then.

On September 8, 1906, the church united with Wood County Baptist Association and on September 11, 1908, Bro. J.H. Lindley organized the Sunday School.

In the summer of 1916, Bro. F.J. Blackmon held a revival and the church population swelled to its largest size to date. There were 77 additions, 63 for baptism and 14 by letter. On August 27, 1916, all 63 were baptized in the creek north of the H.N. Penix property. In 1925, a building committee began constructing a new church. The building was dedicated on October 30, 1927.

Several pastors were called between 1916 and 1935, when the church building burned on a Sunday afternoon. It was quickly rebuilt and in 1954, the church was remodeled and enlarged. More Sunday School classes were added. The interior of the sanctuary was paneled and carpeted, and a baptistry and central heating and cooling system were installed.

In 1977, the sanctuary was remodeled extensively, with chandeliers donated by Henrietta Moore. Leftover funds were used to start a benevolence fund, which led to additional parking space across the road. The church voted to add a fellowship hall in April of 1983; it was dedicated on Homecoming day that same year.

In 1994, the Duke family helped the church acquire the old Hainesville Store building, which was used as a Youth Annex and dedicated on July 17.